Meta-search engines send a user's query to multiple search engines and blend the top results from each into one overall list. A final step can involve clustering the combined results. Meta-search has intrinsic advantages that are based on collection and analysis that brings the most popular themes to attention so the results can be displayed in a way that will help brains quickly assess weighted significance, without the need for pesky percentage calculations.

The Q Science Team, having misplaced our calculator, applied the coolest purple-type meta-search techniques to your report of What’s Happening Here? in the dream scenario from Module 2:

Larry, Boris and Natasha are in the future, living in a reality that is without the false concept of fear and destruction generated by the technology of today’s times. They have been delivered to a sleek ovoid space station by a red velvet rocket ship that came from the Purple Mountain Majesties planet—soon the WHOLE UNIVERSE will be purple or at least violet—ahHHHhahahahahah

After moving into the luxurious lavender space station, they discover that retired president Barack Obama is living on the far light blue side of the planet, right behind the purple mountains, running a holding facility for extremely cruel and mildly unusual people. The prisoners are tortured by being forced to watch daytime TV—if they don’t watch TV, they’ll explode. From the space station, L, B & N can see the facility in the background where Barack Obama’s bean burgers are made.

On the other hand, L, B & N are living a green purple life, terra-farming broccoli and raising transgender fruitflies to subsist. Their daily activities are recorded for a reality show on the Exploding TV Network (that powers rockets and the fuel saved is recycled to dry cleaners in Aspen on the planet Earth). Little do the researchers know that the prisoners at the holding facility are being forced to watch a boring science reality show—when they would prefer to watch stories about your mother, your father, your friends, your not-so-sex life, the right to end your life, the right to run, the right to kill—in short—YOUR WORLD! Because they’re forced to watch the Exploding TV Network, the prisoners are privy to the researchers’ every move and are even now plotting to capture the space station, overthrow and kill them.

For security purposes, a horrible exploding type bomb has been programmed to destroy the space station if the researchers do not re-set it at the proper time; this is intended to keep deadly technological secrets from being stolen by infernal aliens should they capture the station and kill all the human researchers. But the unintended consequences will be that in the near future, tragic events will unfold, blowing up harsh reality as 98% of residents on this planet knows it.

We don’t really want to go there…. 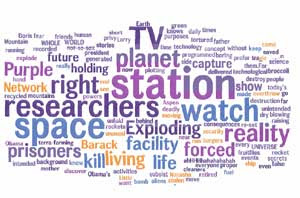 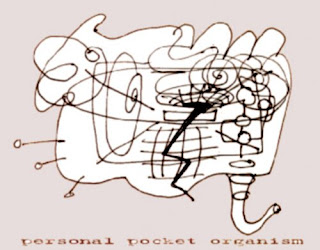 The Q Science Marketing Team, in a sneaky effort to make big bucks while pleasing our sponsors, asked for your personal requests about what abilities we should build into our Personal Pocket Organism (due out next year). Based on your survey, the following requests will receive serious consideration:

get me home from work quicker
tell me things I don't want to hear
calculate the square root of 11 (which is 3.31..., by the way)
personal pocket orgasms
taking surveys
something to do with sex
groom me
generate heat
make sandwiches
rearrange the crotch of my pants
tell me when I’m lying
be a furry oracle
sort out my bills
sort out my children
shoot up a propeller and fly me somewhere fun
nudge me before I say something stupid
pinch me at appropriate moments
bake a good veggie lasagna
reformulate negative emotions into masterstrokes
tickle me or tell me a joke
remind me
reproduce
provide food and H20 when necessary
be funny to look at
love me
provide sympathy
eschew things, embrace other things
produce cola on demand
EVERYFUCKINGTHING

One request, in particular, intrigued the Q Science Team:
Pinch me when I'm dreaming.* Hmm.
However, a majority of requests had to do with Lint. So, we are proud and excited to announce that the prototype Personal Pocket Organism will have the ability to: 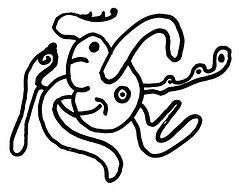 However, the consensus of the respondents was that this entity either is or is related to:
ANSWER: an Octopus or Squid or something with Tentacles

QUESTION: What is it doing?
The Entity was reported to be:
flying,laughing,smoking,fishing,fucking,happy,caressing,hangingout,
sayinghello, swimming,floating,self-basting,eating or being eaten,
being ironic, running, choosing an identify,training for womb olympics,
smiling, observing, trying to make up its mind.

However, the Entity was most commonly reported to be:
ANSWER: Dancing

QUESTION: Have you ever dreamed This?
Only 24% of respondents reported ever having dreamed this entity.

QUESTION: Should we release it?
In spite of that, our respondents did not judge the Entity to be threatening. A surprising 86% of respondents expressed the opinion that Entity 1 should be released.

DISPOSITION of Entity 1: As a result of the survey, the Q Science Team reports that Entity 1 was set free just outside the laboratory and was last reported dancing toward the Peachtree-DeKalb airport. 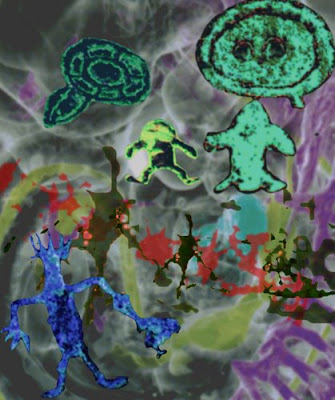 QUESTION: Do you have Recurring Themes in your Dreams?
The vast majority of respondents reported having recurring themes in their dreams similar to what happens in real life. The following study of themes reported is based on the latest interpretation of dream hooey and dream hooey analysis. Here, discussed by category, are some of the recurring Dream Themes you admitted to in our initial survey:

Creativity
Singing while levitating—You are feeling happy and creative—at least while sound asleep in bed.
Surfing along at high speed—Joy and creativity are expressed by this dream activity—or else you are web surfing too much and consequently not getting enough physical exercise.
Paralyzing Fear
Being chased by a toothbrush—Traumatic dental visits? Go ahead, turn around and face your fears! The toothbrush will not hurt you if you whirl and face up to it in your dream. We promise!
Unexpected Growth
Discovering secret additions (in a house)—The house is your life; you are in a growth phase, whether you outwardly admit or inwardly realize what’s going on—either that or you’re gaining weight.
Forgetting that I own important property—You are neglecting a part of yourself vital to growth, your life is off track—this dream is a reminder to Pay Attention! Growth may happen while you nap, but then you have to go out and cut the grass.
The whole world is a circus—Our dream interpretation experts have determined that you made this one up to try to sound more interesting than you are—that’s pathetic, BTW, but we can’t let it get past us.
Mammalian Certainties
Rubbing warm bodies together; Cumming ; Sex; Immobility; Inertia; Weasels—You all are dangerously horny and should get laid ASAP—get offline and go circulate among some warm bodies FGS!
A lot of water—You are experiencing a deep emotional breakthrough, or, you should not eat fast food so often late at night.
Too creepie to mention—Well OK, go ahead and repress while the rest of us are really trying for a breakthrough here—it’s subjects like you that are holding up the progress of dream research!
Repression
Floating in the backyard—You are repressing and suppressing strong emotions; Watch out! If you stop stuffing it down for even a moment you may launch.
Flying in a crouching posture—You also are repressed—trying to protect yourself by keeping a low profile, but WTF, if you’re going to fly why not wear the purple tights and stretch out?

QUESTION: Have you ever found Something Under Your Pillow after dreaming? If so, What?
Approximately half the (waking) respondents reported finding something under their pillow. The items reported to our initial survey included:
my hand, my arm, lint, a sheet, my forearm, my hand still attached to my arm
No one reported someone else’s hand, arm, lint, sheet, forearm or hand attached to arm under their pillow...and on and on and on like that. People!! One respondent reported finding the Tooth Fairy, but we did not find that report convincing.

It seems as if none of you got 100% on this one. In fact, not one person got one part labelled correctly. Come on people! What is it going to take? Pay attention. 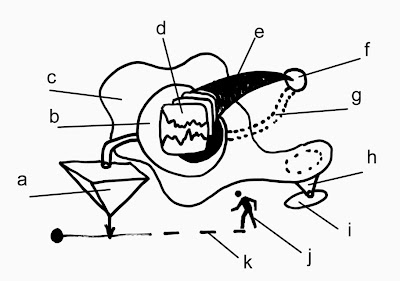 Here are the correct labels:

Surprisingly, a LOT of the labels given matched another diagram that we did not publish. This is statistically unlikely, to say the least. Arriving at a plausible hypothesis to explain this anomaly will require much more research. Suggestions have been made as to possible mechanisms that could explain these results, including: interference by an unknown party or force, some kind of telepathy (ha!), or that we simply goofed up somehow (not likely). 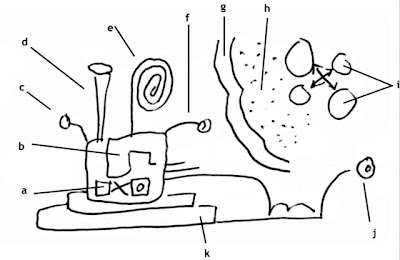 and the correct labels, provided by the test subjects:

a. Unripe swiss cheese
b. gizzard
c. Surrounding stuff
d. aggravation index
e. sample of the nuke-soil
f. Object of focus
g. worm hole
h. emergency escape for the pooper into another dimension when he runs out of poo poo
i. i-loop (grounding)
j: Larry
k. Ah. Now there's the interesting part and possibly the only one that can be directly influenced by action

Tell Us About Your Dream

The Q Science Dream Survey was initiated because an informal poll of our friends and acquaintances indicated it is not uncommon for seemingly ordinary humans to have some crazy-ass dreams and perplexing, disturbing and sometimes clarifying hallucinations. After learning of this phenomenon, it seemed incumbent on us, the Q Science Team, to launch an extensive, ongoing investigation utilizing the hottest, cutting-edge nanotechnology and psychologically intoxicating dream artifacts to shed enlightenment on the subject.

The interest almost all people have in dreams may indicate a collective yearning to escape from their apparently stable daily existence and find novelty between the sheets. And indeed, a summary of our initial findings illustrates the high degree of plasticity of delusions experienced by the mind while the body languishes in a sleeping state. Actually, we were surprised (not shocked, we’re scientists after all) by the graphic nature of some dreams that were reported during the trial survey. It seems that with the slightest provocation our respondents described elaborate episodes that will make your hair stand on end.

So without further ado we present our initial unexpurgated (but always summarized) results of the trial Q Science Dream Interpretation Survey.
Posted by Psilla Cyben at 6:18 PM 2 comments: